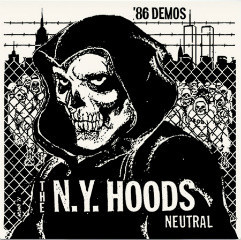 For the first time ever on vinyl will be the official release of the NY Hoods' demo, remixed and remastered. Due out in late February the 7" will have 5 songs. Limited edition of just 500 pressed with 100 white, 100 splatter and 300 on black vinyl. The first 300 will come with a digital download card. Members of NY Hoods went on to play in Side By Side, Absolution, and Burn.

On February 20th a new label called Under Watchful Eyes with the help of United Riot Records will be releasing the Strong Island Boot Boys "Pitbull Breed" 7". The 5 song 7" features members of Offensive Weapon and Fed Up! and this release will be out on red, white, and blue vinyl.

United Riot Records  Get it here
Posted by James Damion at 12:14 PM