Four Fingers Ryan Betrix Gives Us the Low Down on Their New Album "Custodians of Light" and More. 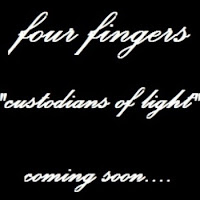 If you've followed the blog over the last ten or so months you've probably noticed that we're pretty fond of the kids in Four Fingers. Who wouldn't love a band that mixes musical influences like Adrenalin OD and the live energy of Black Flag and the Stooges. Add to that they just happen to be the  band I'd most like to share a late night skillet with. So as the bands upcoming album "Custodians of Light" is about to hit the streets,  I reached out to their bass player Ryan Betrix to get the 411 on the record and recent changes within the band. Here's what he had to say.  James Damion

James: You recently finished recording the new album "Custodians of Light". Can you tell me a little about the process and what we can expect from the new album?

Ryan: The actual recording process was a one-day thing. After the tour and a few shows here and there we put our full attention to the writing of the record. There’s like 5 songs on this record that were  songs that actually pushed us to do a record. We used thee songs almost as guidelines to how we wanted the record to sound and the addition we wanted to bring to the record. On this record we wanted it to have a dark feel. Also, we wanted to keep it catchy like songs in the past. I think you hear everyone’s  specific influences in every song. Going into this record we didn’t want to follow just one style. It’s got a bit of everything. Best thing we’ve done yet. 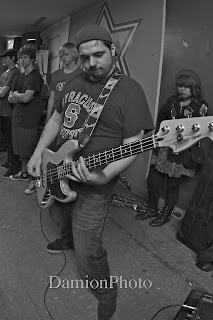 James: "Custodian of Lights" is a pretty epic title. I don't know why but it somehow makes me think of the Foo Fighters "Wasting Light". What's behind the name?

Ryan: The title reflects on the idea that the Custodians of Light are those who deal with the bullshit and garbage life has to offer and somehow make the best of it. Were there are the people that have everything in life handed to them and take things for granted. The Custodians of Light feel that one man’s trash is another man treasure. That’s how I see it. To get the perfect answer you would have to ask Chris. “Wasting Light”? Never heard it. Is it a good record?  Other than the word Light I don’t think they have anything in common.

James: The band was taking pre-orders on the record before it was even recorded. You also didn't have label support. Was that somewhat of a risk for you? How did you feel about that decision?

Ryan: It was not a risk at all. There was a part of us that didn’t even think the record would happen. Because we were so passionate about the songs and felt they needed to be heard we needed to do anything and everything to get this record out there. Not having a label backing you is one of the hardest parts of doing a record. We never had a label back us before so it is something we are really use to. The pre-orders are just a way to help speed the process. Also, we planed to give the people that did do preorders a little extra. I like to think we are treating them good.  We never ruled out putting it out ourselves. It’s the way we do things. Even if someone were willing to put the record out for us it may not have felt right. All of us like to have the control of the band. I wouldn’t want just anybody putting out our record for us because we may risk losing  control.

James: Did you reach out to any labels during the process or was this planned as a self financed release from the beginning?

Ryan: We did send it out to a few labels but again we always go into it thinking we are going to press it ourselves. Having someone back us would be awesome, but it’s got to be right. We just knew we had to go into it thinking it would be self released. It’s better that way. Never get your hopes up.

James: I've just heard that Jeff is leaving the band. This honestly came as a major surprise to me. What was the reasoning behind his departure?

Ryan: Jeff has other things in his life he needs to focus on. He really wants to work on his film. It’s not easy being in Four Fingers. (Laughs) With everything going on in his life right now, staying in the band would just be too much. We are cool with it and wish him the best. Love you Jeff!

James: Not too long ago you were the new guy in the band. I'm not sure if I ever told you this but I really felt that, in a sense you felt like the missing piece the band needed to take things to the next level. What was the transition like?

Ryan: Joe is a great guitar player. I pushed for this really hard. We played in Shakedown together and we’ve been jamming together for about seven years now; whether it was just jamming or in bands. I know Joe’s style better than anyone else. So this was easy for me. He fits into this band very well and brings a lot of energy. Also, we’ve been playing and writing together for so long it makes him very easy to work with. After the very first jam with him we knew he was the guy. He had everything down. Also, his attitude shows that he wants in for the long haul. Hope everyone digs him as much as we do. Yes, I get the missing piece thing a lot, but don’t see it. To be honest, I didn’t feel like there was much of a transition. The guys always made me feel equal in everything we do we do as a group. I mean sure,  there where times when they would talk about shows they played that were badass; but I never really felt like the new guy, even though I was. Joe won’t have a problem at all. Now I can rub my awesome shows in his face. 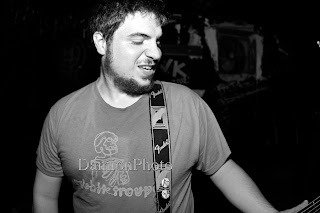 James: What advice would you give Joe that would help him in both filling Jeff's rather large shoes all while dealing with the energy that is Tohm and Chris?

Ryan: I would just say be you. We don’t want him to wear Jeff’s shoes or fill them. We just want him to have fun and learn to love what we do. I know this is what he’s dreamed of. Joe’s the type of guy to feed off of others energy. That’s why I really think it’s going to work. I promise you the next couple shows we got coming up will be intense! I think fans of Four Fingers will be very pleased with what we accomplished this year.