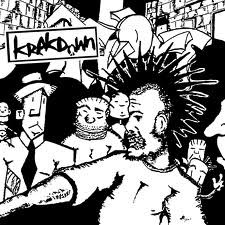 Excitement arrived at my doorstep today when my delivery from State of Mind Recording finally arrived. I had ordered the record back in early October and wondered if would ever show up. Krakdown had been a favorite of mine since my infancy on the New York Hardcore scene. Having seen them countless times, they more than earned that favoritism.

Krakdown existed from 1985 until around 1990 and went through numerous lineup changes including a hard to find first demo with future Crumbsuckers frontman Chris Notaro. The band played fast, raw Hardcore in a time when most of their contemporaries were experimenting with Metal. Known for their amazing live sets,
they played countless shows with the likes of Straight Ahead, Breakdown, Killing Time, Altercation and countless others. Though often over looked or under appreciated by Hardcore revisionists. Anyone who played with them, saw them live or hung out with them, can attest to just how amazing they were. Jay was just an amazing front man.

The 7 inch includes the original material from the Common Cause self titled 7 inch EP along with  two additional tracks "Ignorance" from Revelation Records "The Way it is" Compilation and "Krakdown" from their 1988 demo. Though they haven't added any new tricks such as remastering the sound. Krakdown is one of the kind of bands that probably wouldn't benefit from such. Krakdown were always a band that were at their best in a live uncontrolled setting. Thus embodying the raw energy of what Hardcore was.  Whether you were a fan back then or just want a taste of the raw energy of 80's Hardcore;  I suggest you get this. James Damion

Buy It Here
Posted by James Damion at 5:05 PM