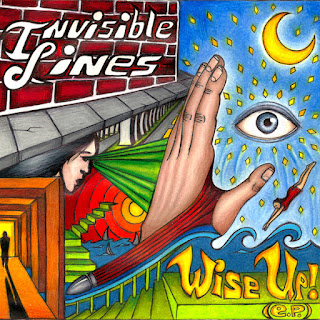 With all the amazing music flooding my mailbox recently you'd think it was Christmas here at UBRS.  As more and more submissions come my way I find myself having trouble focusing my thoughts on one particular release. That is until today. I decided to take some time to devote my thoughts and praise to one particular release that's been in heavy rotation for here for or  over a month now.

Invisible Lines hail from Kearny, NJ and have been building a reputation as a  "must see/hear" band since their start in 2007. Blending different elements of rock that vary from Indie, Punk and Post Core. Each element coming together to bare very good results.
Though "Wise Up" was released back in 2010 (KillingHorse Records). Invisible Lines is  a relatively new band to my ears and though it's not what you would consider a new release. It is certainly one that I felt deserved attention.

The EP opens with "Medula", a track that immediately puts the listener on alert. It's frantic pace is a total adrenaline rush. I found myself dancing around spasticly as if I were some outcast "Peanuts" character. Jangly, frantic and a bit eccentric while still holding on to a sense of agility. It's an attention getter to say the very least. "Painmaker" takes a similar approach with more fluid results. "Clean the Mess" is a little more relaxed but still contains a lot of the excellent riffs your treated to throughout. "2 Stops 1" mixes more great vocals and a mix of choppy and driving guitar mixes. The EP finished up with "Release" a track that seems to benefit from a battle of musically split personalities. Relentless, the record never gets lazy or allow the listener to leave the edge of their seat. Throughout the record I felt a lot of different influences, including Quicksand, Fugazi, At The Drive Inn and others. Those influences however,  never overshadowed any of the bands sound, originality or overall excellence. James Damion