If experience has taught me anything. It's not to judge a book... Or in this case, band by it's namesake.
Such was the case when giving Seattle's Smoked Solid Dairy a quick, yet enjoyable listen.
Initiated by April 2017's 'Trash of the Past'. 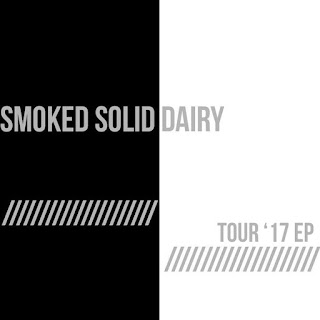 I hoped to dig a little deeper into the mystery of Smoked Solid Dairy to get past my original impressions of a pretty goofy sounding band to give a band that reminded me of so many of the bands that introduced me to  American Punk during my impressionable teen years.
Though only featuring a lean three songs 'Tour '17 EP'  manages to revisit my love for such 80's favorites as D.I., The Vandals, T.S.O.L. and Crimpshrine. Nerdy  punk at it's very best. Smoked Solid Dairy combine fuzzed out guitars with snotty vocals to come up with a garage punk sound that would sound just as good now as it would on an early Lookout Records playlist. Three catchy, accessible and highly addictive songs that will appear on the band's Summer  . Something to hold you over until their upcoming Summer album release
"The Grey Sheep". Something to definitely look forward to.